Since a few months my main computer is running a special Ubuntu-based distribution called KXStudio.
It’s actually a set of PPAs on top of ubuntu repositories, meant to provide updated and additional audio-creation software. Also it’s using KDE Plasma as official desktop, with a very good default configuration and an up-to-date 4.9.5 version. So if you’re interested in a good audio distribution, a good KDE system or both, keep on reading…

As I said KXStudio is a set of PPA repositories, divided in categories, so when I first installed it I started from a fresh Xubuntu install, added the most important repositories on top of it (main, plugins, kernel and drivers, kxstudio, and latest) and installed “kxstudio-desktop-xfce” meta-package. I used an XFCE desktop first because I’ve always had better experience for “real-time” audio on this light desktop, but then when I saw that the officially supported desktop was KDE 4.9, I added the “KDE 4.9” PPA and installed “kxstudio-desktop-kde”, and never had to return to XFCE since then 😉
Now since ~2 weeks there’s a new .iso image to test and install it directly, so you may try it instead for a simpler installation.

The most important difference with any regular distribution is that it’s using the JACK audio server for the system by default. For those who are new to audio software on Linux, JACK is the “realtime” audio server used to run audio software with very low latency and to connect their inputs and outputs to make them work together. So here we have jack launched directly with the desktop, with some bindings for applications using only ALSA or Pulseaudio to JACK. This works very well (and, on a side note, on the KDE desktop it somehow fix the weird issue I had with phonon popping a window now and then saying it can’t find a device..)

It includes new software to make it easy:
-Cadence, a cool GUI to configure JACK, check current system status, and launch the other JACK-tools.
-Catia, a simple patchbay to check and modify audio and midi connections.
-Claudia, same thing as Catia but using LADISH sessions to save and reload settings (for advanced use)
-Carla, a great multi-plugin host for JACK
-a classic log window for troubleshooting
-a render tool to record a JACK project
-a virtual XY-controller+midi keyboard to simulate the equivalent hardware. 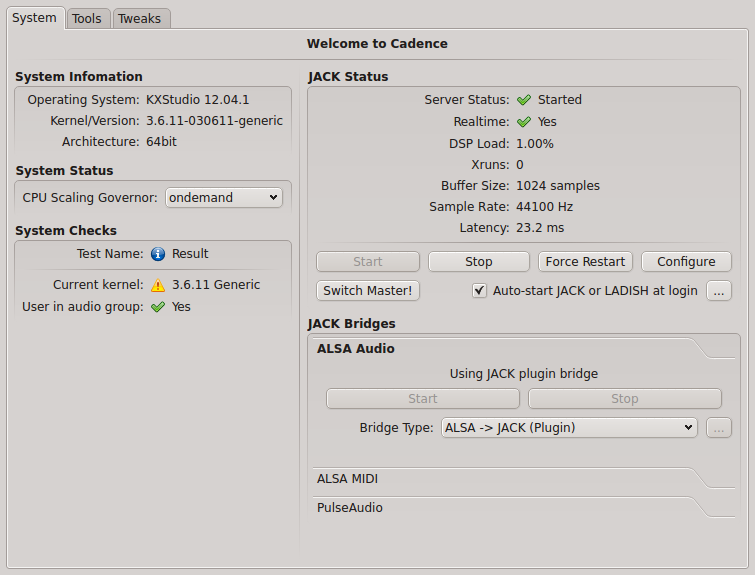 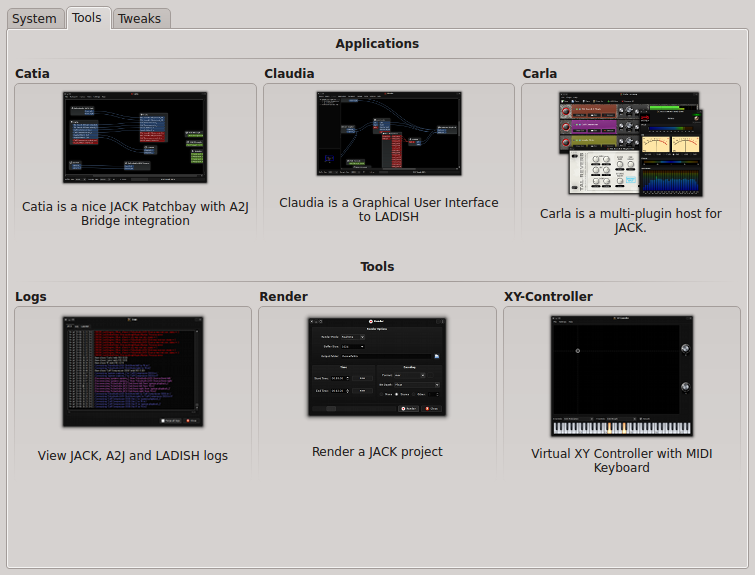 For a better experience, I recommend to use JACK-native software as much as possible, use the alsa-jack bridge for everything else, and really just if none of these works for the software you want to use, install and launch the pulseaudio jack-bridge (but there really is not much pulseaudio-only apps, at least I don’t use any).

For audio player, Aqualung and Clementine have good JACK support.
For video, VLC and MPlayer are JACK compatible too.
Firefox/flash is using the alsa/jack bridge.

Just give it a try when you have a moment, you’ll see by yourself…

Many thanks to the little KXstudio team for all the work!

Technical note specific to intel GPU users:
I use a laptop with intel GPU (Ivy Bridge), which requires drivers much more recent than those shipped with Ubuntu 12.04 (or even 12.10, so I’m still using a 12.04 base..) so I had to activate some more external PPAs for better up-to-date drivers:
– https://launchpad.net/~ubuntu-x-swat/+archive/x-updates
– https://launchpad.net/~ubuntu-x-swat/+archive/intel-graphics-updates
And I installed by hand a more recent 3.6.x kernel from http://kernel.ubuntu.com/~kernel-ppa/mainline/
With recent kernels, it’s not really necessary to have a low-latency or realtime kernel to use realtime in JACK for most cases. However if you have a very big audio workload and start to get some xruns, you may try with a less recent but low-latency or realtime kernel (all versions I’ve find of these are 3.5.x at best…)